For one night only on September 28 2017, over 1,500 cinemas worldwide will be showing a specially edited version of Black Sabbath: The End Of The End.

The film will be distributed to cinemas worldwide on September 28 and will include the incredible final gig as well as unprecedented behind the scenes access to the band, filmed by director Dick Carruthers (Led Zeppelin: Celebration Day, Imagine Dragons: Smoke + Mirrors Live). The End, Live In Birmingham will be released in various formats later this year.

Tickets are now on sale worldwide with more cinemas to follow soon. If Black Sabbath: The End of the End is not screening in a specific area, fans can make a request for via ‘Demand It’ it by filling out a form on the website.

For details of cinemas taking part in this very special one night only event and ticket information visit www.blacksabbathfilmtickets.com.

The End of The End chronicles the final tour from the band that spawned the metal genre – Black Sabbath. On 4th February, 2017, Sabbath stormed the stage in their hometown of Birmingham, to play the 81st and final triumphant gig of The End tour. This monumental show brought down the curtain on a career that spanned almost half a century.

The sold out performance marked the culmination of a global tour that saw the band play to over one and a half million fans. With their inception in 1968, Black Sabbath pioneered a sound that would form the basis of heavy metal, and to this day continues to influence bands the world over.

The film brings fans the up close and personal story of the final, emotionally-charged concert, as the band perform hits including Iron Man, Paranoid, War Pigs and many more. Join Sabbath in the studio, as they deliver unique and exclusive performances of some of their favorite songs not played on the tour, and catch an intimate glimpse into the band’s world; the music, relationships and banter, alongside personal anecdotes.

The band said: “To bring it all back home after all these years was pretty special. It was so hard to say goodbye to the fans, who’ve been incredibly loyal to us through the years. We never dreamed in the early days that we’d be here 49 years later doing our last show on our home turf.”

The End of The End offers you the chance to witness for yourself Black Sabbath’s incredible swansong. As Ozzy says, “What a journey we’ve all had. It’s fucking amazing”. This is the final word from the greatest heavy metal band of all time. 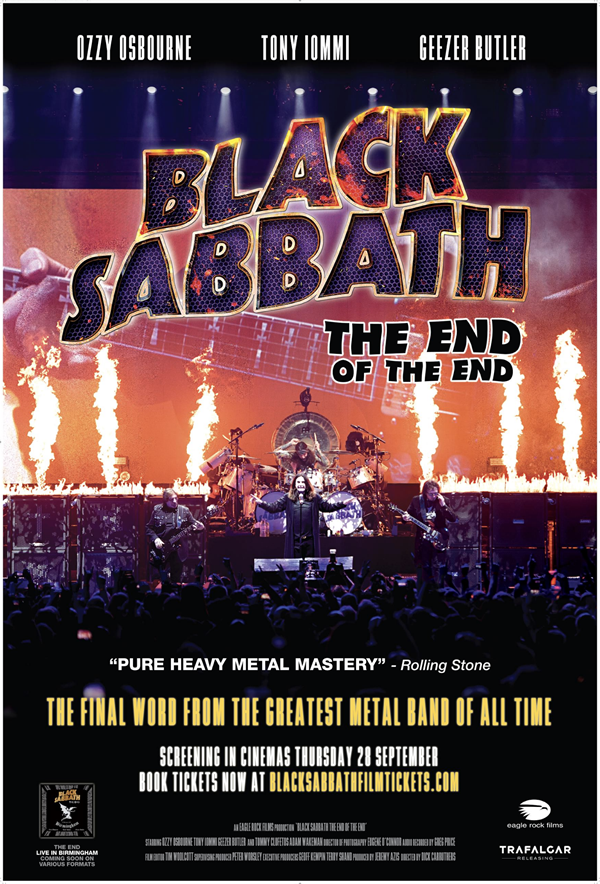