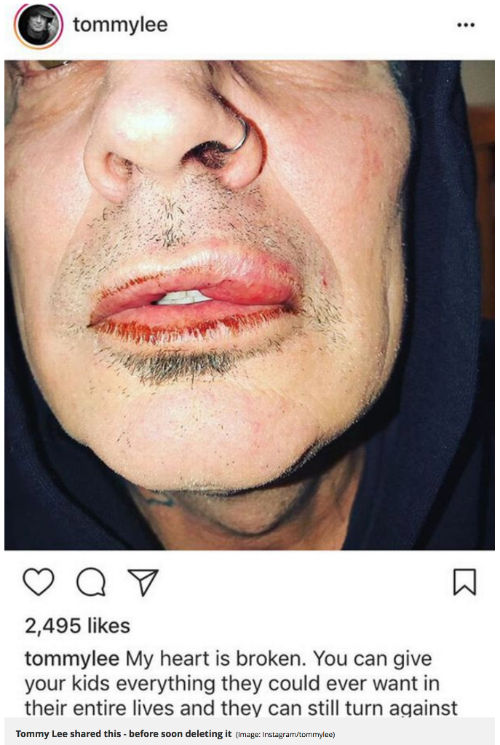 Mötley Crüe drummer Tommy Lee Instagrammed a picture of himself with a swollen lip. He says the lip was caused by his 21-year-old son, Brandon, the eldest of his two children with Pamela Anderson.

“My heart is broken,” he wrote. “You can give your kids everything they could ever want in their entire lives and they can still turn against you. Good job Brandon! Great son!” Lee has since deleted the post.

TMZ is reporting that a source “connected to Brandon” told them that Tommy was drunk at the time and that Brandon acted in self-defense. TMZ added, “The fight happened Monday night, and we’ve confirmed police responded to Tommy’s Calabasas home around 10:45 PM. No arrests, but officers took a report. Tommy was transported to a hospital where he got checked out.”

Hey @TMZ maybe get your facts straight before you go reporting bullshit. My fiancé and I were in bed when my son busted into the room and assaulted me. I asked him to leave the house and he knocked me unconscious. He ran away from the police. THAT’S the truth.