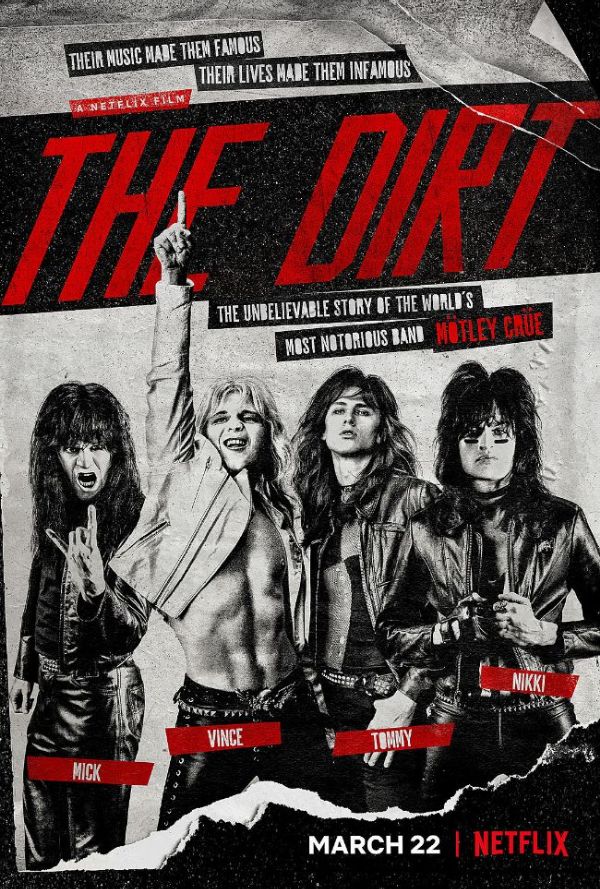 Mötley Crüe’s long awaited biopic, The Dirt, will be released next month on Netflix. The film is based on the band’s 2001 autobiography, The Dirt: Confessions of the World’s Most Notorious Rock Band, which was written by band members Tommy Lee, Vince Neil, Nikki Sixx and Mick Mars, along with New York Times writer Neil Strauss. For anyone who’s read the book, get ready to relive the 80’s heyday of sex, drugs, and rock ‘n’ roll!

Bassist Nikki Sixx, commenting on why this movie has taken 18 years to gestate, says, “Anybody can make a shitty rock movie. We don’t want to do that. A lot of people don’t understand rock music and the rock ‘n’ roll lifestyle. It’s not just sex, drugs and car crashes. Those things happen… and, in our case, more than usual. But what’s at the core of it all is the creativity and the personal relationships between each band member. We don’t just want to slap together the thrill moments. Any of the great movies, whether it’s Walk the Line or Ray, they got the music right and the personalities right.”

In addition, a brand new Crüe song, “The Dirt (Est. 1981) (feat. Machine Gun Kelly)” will be released tomorrow. This will be one of three new Crüe songs on the movie soundtrack. The Dirt debuts March 22 on Netflix – check out the trailer below.