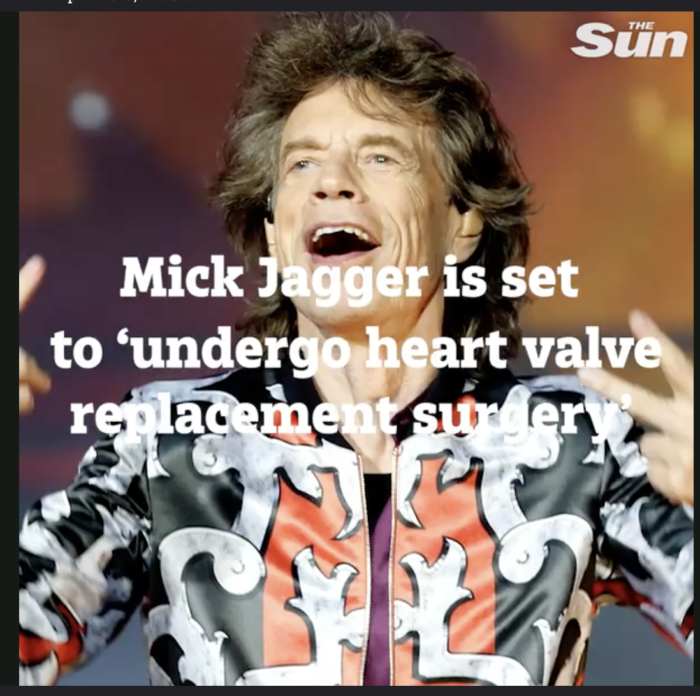 Mick Jagger will undergo surgery to replace a valve in his heart, Rolling Stone reported today. As a result of the procedure and recovery period, the Rolling Stones have postponed the North American leg of their No Filter tour, which was scheduled from April 20 to July 29.

A rep for the band said, “Mick Jagger has been advised by doctors that he cannot go on tour at this time as he needs medical treatment. The doctors have advised Mick that he is expected to make a complete recovery so that he can get back on stage as soon as possible.”

Jagger said in a statement, “I really hate letting you down like this. I’m devastated for having to postpone the tour but I will be working very hard to be back on stage as soon as I can.”

The Sun reported news of the heart valve surgery, adding that the procedure will take place Friday in New York and that Jagger is expected to be out of hospital 48 hours after surgery, make a full recovery and return to touring this summer.

The Sun reported, “Mick will be undergoing a non-invasive heart valve procedure. The prognosis is good and this kind of surgery has a high success rate.”

Professor Sir Nilesh Samani, Medical Director at the British Heart Foundation, said Mick will probably have keyhole surgery. He said: “The benefit is that there are no big scars that need to heal, unlike open heart surgery.

“A patient can expect to go home within 24 to 48 hours, feel well one or two weeks later and be back to normal health after a month. The procedure is highly successful and if all goes well, it is possible Mick will have more energy than previously.”