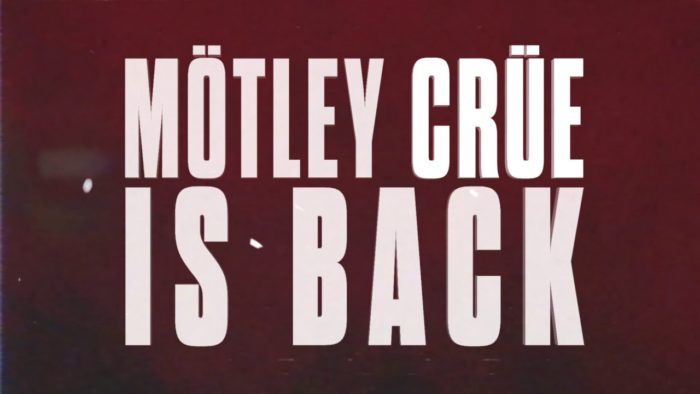 Mötley Crüe have officially confirmed that they are reuniting. Rolling Stone confirmed from their sources that a Mötley Crüe, Def Leppard and Poison 2020 stadium tour is happening.

Sources close to Mötley Crüe say their explosive reunion announcement Monday (Nov. 18) — where they blew up a contract signed during their final tour — came a bit earlier than expected, after The Black Crowes manager Mark DiDia blabbed about the tour on The Howard Stern Show last week. The band had been planning a reunion announcement for the first week of December, followed a week later with news they would be touring stadiums in 2020 with Def Leppard and Poison.

Mötley Crüe released this teaser video, and posted Monday on their website,

“Almost 6 years after signing a Cessation of Touring agreement, the contract is off the table because a whole new generation of Crüeheads are relentlessly demanding for the band to come back together. Following the huge success of their Netflix biopic “The Dirt” , Mötley Crüe has seen a massive surge in new audience. And the band best known for breaking the rules has destroyed their cessation of touring contract in true Mötley Crüe-fashion, by literally blowing it up.

After 35 years together on stage, and 30 years since the release of Dr. Feelgood, the members of Mötley Crüe parted ways without speaking to each other after their Final Show on December 31, 2015.  Vince, Nikki, Mick and Tommy didn’t come together again until 2018 to participate in the making of “The Dirt” movie, which unexpectedly brought them closer together again including seeing them head back into the recording studio after having gone in their own directions for several years. The fuse was lit.

“Since playing Tommy Lee in “The Dirt” , so many of my fans have said how they wish they could’ve seen the real Mötley Crüe play live,” said Colson Baker (aka Machine Gun Kelly) “I never thought I would see the day when this would become a reality. But the fans spoke and Mötley Crüe listened!”

Sign up for text updates (U.S. only) by texting MotleyCrueIsBack to 855 580 CRÜE (2783) or sign up for email updates at www.Motley.com to get breaking Mötley Crüe news.”