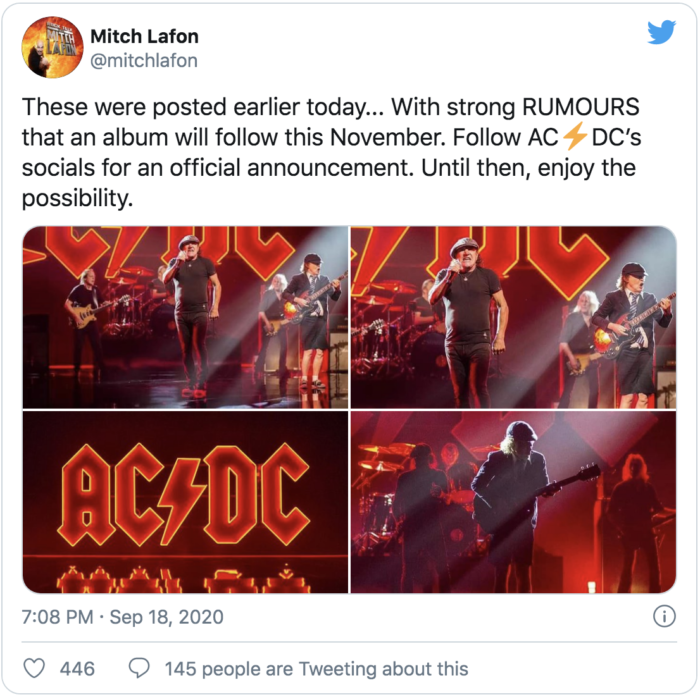 More good news to report — it looks like AC/DC are reuniting with singer Brian Johnson and drummer Phil Rudd!  At least according to a bunch of photos posted online on the AC/DC website last week and then quickly deleted.

In July, our very own Dee Snider, a close pal of the band, stated that their next album is already finished but its release has been delayed due to the coronavirus pandemic.

“This is gonna be a miracle of technology,” Snider told ABC. “What will be achieved, the reuniting of the band that we know for one more album, is gonna be uplifting and heartbreaking at the same time. Because nothing goes on forever. But this is the ultimate ‘one more time.’”

In February, Snider also tweeted about a dinner he had with Brian Johnson, revealing that the frontman told him “a lot of stuff, and a lot of stuff that I don’t wanna say”.

“But we know from the photos, and Brian confirmed it, they’ve been in the studio, they’ve been recording,” he added. Last year AC/DC were seen working at Bryan Adams’ Warehouse Studio in Vancouver with engineer Mike Fraser – who mixed and engineered the band’s last three albums (Stiff Upper Lip, Black Ice and Rock Or Bust). The forthcoming album is also said to include the late Malcolm Young playing rhythm guitar on all tracks.

In 2014, Phil Rudd was arrested for attempting to procure a murder and various drug charges.  He was fired from the band for the 2nd time in his career. In 2016, Brian Johnson was replaced on the live tour by Guns N’ Roses singer Axl Rose, after doctors told Johnson to stop performing or risk going deaf.  In 2017, Malcolm Young died after suffering from dementia for several years.