Eddie Van Halen, rock icon, guitar virtuoso and co-founder of Van Halen, dies after a long battle with throat cancer in Santa Monica, CA. He was 65. Eddie died with his second wife, Janie, son Wolfgang, and brother Alex by his side. Eddie had been rumored to be fighting cancer for many years, traveling to Germany for experimental treatments and in 2000 having the surgical removal of part of his tongue. He also had chronic joint problems, leading to hip replacement surgery in 1999. Van Halen was a heavy smoker throughout his life – a cigarette was a ubiquitous sight in almost any picture of him from the 80s.

Founded in 1972 in Pasadena, CA, Van Halen became one of the world’s biggest rock bands, mainly due to Eddie’s explosive and innovative guitar playing, accompanied by lead singer David Lee Roth’s dazzling over-the-top stage antics. Their debut album eventually sold over 10 million copies, and vaulted them into the rock superstar stratosphere. By the time of their 6th album, 1984, they finally attained their first #1 hit with “Jump,” and sold another 10 million units.

After Roth quit the band after the successful 1984 tour due to conflicts over their musical direction, Van Halen surfaced even stronger with ex-Montrose vocalist Sammy Hagar, who between 1986-1995 released four consecutive #1 albums with the group.

Variety‘s Chris Morris wrote an extensive retrospective of Van Halen’s career that we encourage you to read.

The last Twitter post from Eddie Van Halen was this birthday wish to his brother: Happy Birthday Al!! Love Ya!!

Rock music legend Eddie Van Halen has died at 65 after a years-long battle with cancer. In honor of the iconic @vanhalen guitarist, we’re throwing it back to 1988 when he told us his thoughts on being called a “guitar hero” ❤️ #RIPEddieVanHalen pic.twitter.com/sOhPricrlB

Tributes have been pouring in from family, friends and virtually every major rock star on the planet. 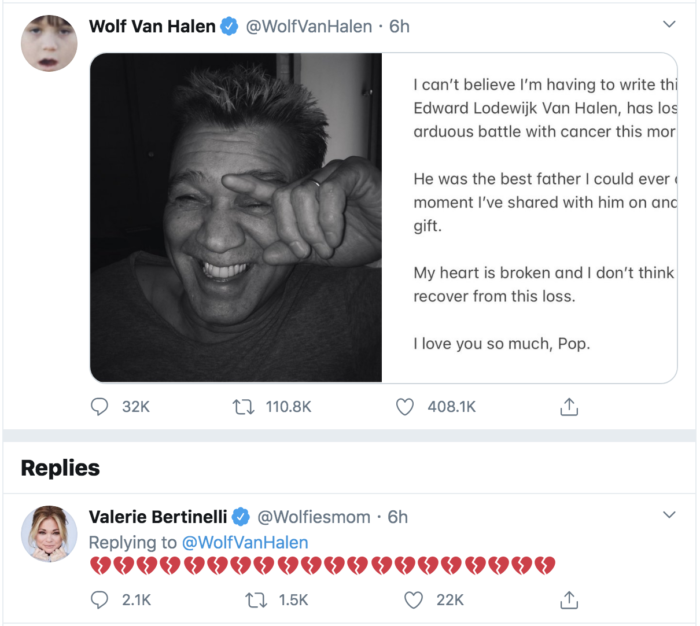 What a Long Great Trip It’s Been.. pic.twitter.com/M5pmkVi7hW

Heartbroken and speechless. My love to the family. pic.twitter.com/MQMueMF2XO 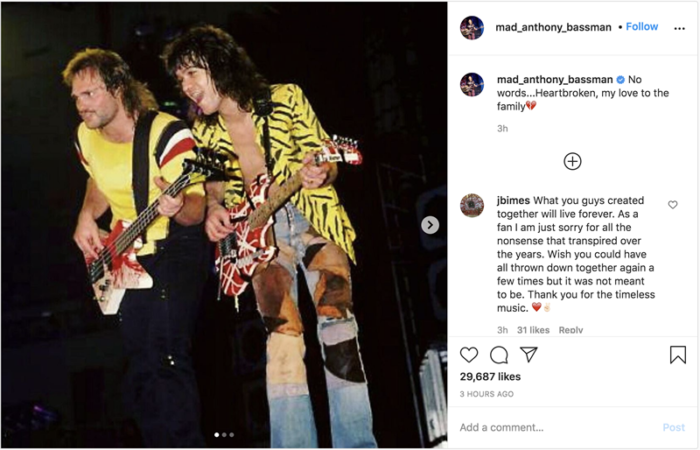 Whether you were blessed to have known him or not, He was a kind and gentle soul… His impact on ALL our lives was immeasurable! His music, eternal! My deepest sympathies to the Van Halen family… Love you Ed #LongLiveTheKing!

We are enormously saddened to hear about the untimely passing of Eddie Van Halen. We considered him an inspiration, an idol, and after spending a summer together on the road in '88, a friend. Sending love to Alex, @wolfvanhalen & everyone in the greater VH family.

. @EddieVanHalen was one of the nicest guys I ever worked with and we shared so many laughs together. His influence on music and especially the guitar has been immeasurable. He was an absolute legend. Eddie, I’ll see you on the other side, my friend. Love, Ozzy.

Just found out @eddievanhalen has died. I remember driving home from a @TwistedSisterNY club gig with @AnimalTactics late one night and hearing "Eruption" on the radio for the first time. Our minds were blown…and guitar playing was never the same. RIP Eddie. You left your mark.

My heart is broken. Eddie was not only a Guitar God, but a genuinely beautiful soul. Rest in peace, Eddie! …Eddie Van Halen Dead at 65 from Cancer https://t.co/gITtcndQVv