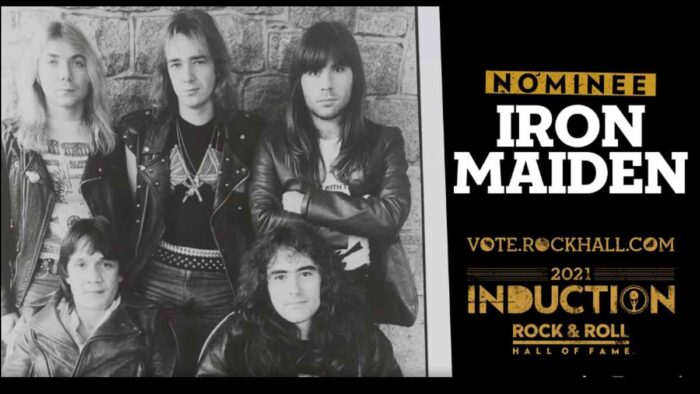 The nominations are in and after 17 years of snubs, Iron Maiden have finally been nominated for the Rock & Roll Hall of Fame.

Artists are eligible to be nominated 25 years after they released their first commercial recording. Despite Iron Maiden being around for over 40 years, this is their first time on the ballot.

Fans can vote for up to five nominees a day, but each of the top five fan-vote-getters listed above only get ONE additional vote to go along with the “regular” ballots cast by a voting body of over 1,000 artists, historians and music industry members. For example, if Iron Maiden get more fan votes than any other artist, and then 500 industry votes, they’ll still only have 501 votes. In other words, the fan vote is mostly honorary.  All joking aside – the fan vote does count, even if only to influence the Hall of Fame voters.  Hey, it worked for the Doobie Brothers!!  So go vote here!

Voting has begun and the shortlist will be slashed to reveal the official inductees in May, with the ceremony taking place “this fall” in Cleveland, Ohio. Of the nominees, several are first-timers. Foo Fighters and Jay-Z are being recognized in their first year of eligibility, while Blige, the Go-Go’s, Kuti, Iron Maiden and Warwick are receiving their inaugural nods. For others, there’s a chance of additional glory: King had previously been inducted into the Rock Hall for her songwriting in 1990; while Turner, along with her musical partner Ike, was inducted in 1992. If inducted yet again, King and Turner will become the second and third female artists to get in the Rock Hall twice, after Stevie Nicks.

Due to the ongoing pandemic, the Hall was forced to permanently push back the time frame of future ceremonies. Starting with the current 2021 class, the nominating and voting process will occur in February and May, respectively, and culminate in a fall ceremony. Chatting with Vulture last November, Rock Hall CEO Joel Peresman said that such a timing change was required to properly celebrate the inductees, and he’s “hopeful by next fall in some form that we’ll be able to get together again.”

As of 9PM February 11, Iron Maiden was in third place behind Tina Turner and the Foo Fighters…