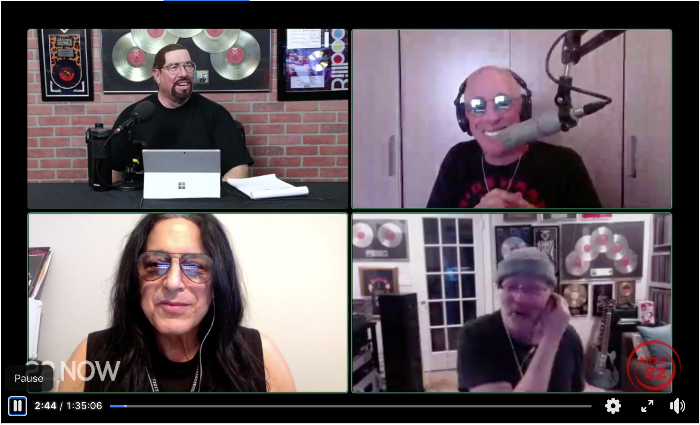 On March 20th, the surviving members of the classic lineup of Twisted Sister — Dee Snider, Jay Jay French, Eddie Ojeda and Mark “The Animal” Mendoza — reunited virtually on Mark Mendoza’s webcast, 22 Now, to pay tribute to late drummer A.J. Pero. The 90 minute program was a tribute to Pero, who died exactly six years earlier at the age of 55 while on tour with the band Adrenaline Mob. Check out the stream below.

Pero, who rose to fame with Twisted Sister and played with Adrenaline Mob when not touring with Twisted, passed away in March 2015 after suffering a massive heart attack.

After Pero‘s death, Snider spoke to TMZ about the loss of his friend. He said: “People ask me how I feel about A.J.‘s passing, and, quite honestly, I’m going through a real period of anger right now about it. He was a great guy, and I loved him dearly. But he had a history of heart disease — his family did; his father died in his [50s] of heart disease — and A.J. never had himself checked out. And when they did the autopsy, he had 95 percent blockage, advanced heart disease. And he didn’t have to die. And I feel it’s, basically, irresponsible behavior on his part. He had two ex-wives and an ex-girlfriend of 19 years, four kids he left behind. And you have a responsibility, as a parent, as an adult, to get yourself checked out.”

“Like I said on the TMZ thing, when they got him to the hospital, he was already gone,” Dee added. “He had a massive stroke on the tour bus, followed by a massive heart attack. They got him to the hospital, they autopsied him and they said, ‘If he had gotten here and he was still alive, he was too far gone for us to save him.’ And this is the day and age of heart transplants and stents and all kinds of… if you believe in drugs for these problems… all kinds of solutions for a relatively young man to not die of heart disease. All he had to do is get checked out and be monitored. That’s all it takes.”

Prior to last night’s virtual reunion, the four surviving members of Twisted Sister reunited for two days and nights in November 2019 to celebrate the 35th anniversary of the band’s classic album “Stay Hungry”.

Twisted Sister called it quits in 2016 after completing a farewell 40th-anniversary tour. The band’s last-ever concert took place in November of that year — 20 months after the passing of Pero.