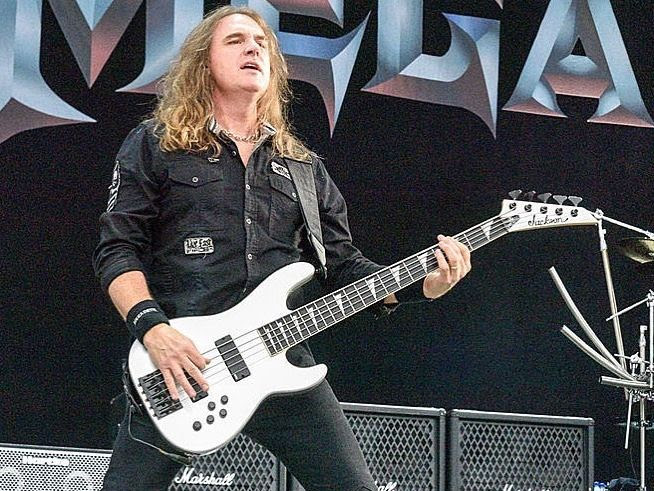 Original Megadeth bassist David Ellefson is denying allegations that he groomed an underage female fan after “private, adult interactions” with said fan leaked over the weekend.

Ellefson said “As you may or not know, some private and personal conversations and interactions have surfaced online, released with ill intention by a third party who was not authorized to have them or share them,” Ellefson said in an earlier Instagram post before switching his account to private mode. “While certainly embarrassing, I want to address it as openly and honestly as possible. As much as it’s not something I’m proud of, these were private, adult interactions that were taken out of context and manipulated to inflict maximum damage to my reputation my career and family.”

Additionally, Ellefson included a purported statement from the woman. She denied being underage when the video calls took place, describing any suggestion that she had been groomed by Ellefson as “misinformation.”  She stated, “Yes, those video calls did happen, but I was the one to initiate it and never was I underage, I was always a consenting adult. Nothing inappropriate ever happened before that. It was all consensual, I’m not a victim and I have not been groomed in the slightest as I was the one to initiate it.”

Ellefson celebrated his 27th wedding anniversary with wife, Julie Foley, last month, and became a Lutheran pastor in 2012.  They have two children together, Roman Alexander (25) and Athena Grace (22).

Ellefson is the second-longest serving member of Megadeth, after fellow cofounder Dave Mustaine. 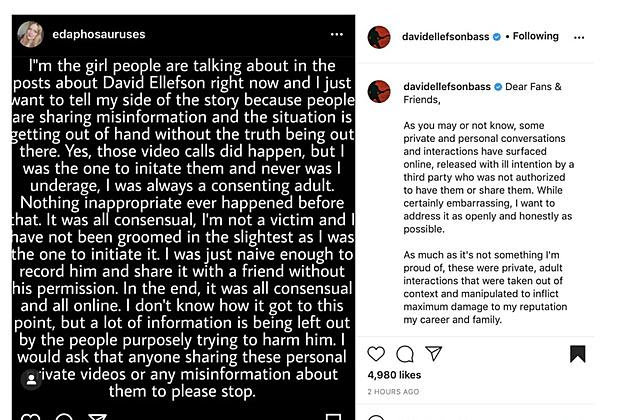 Megadeth have issued a formal response:

“We are aware of the recent statements regarding David Ellefson, and are watching developments closely. As it relates to creativity and business, we are all familiar with one another. However, there are clearly aspects of David’s private life that he has kept to himself. As this situation unfolds, it is important that all voices be heard clearly and respectfully. We look forward to the truth coming to light.” 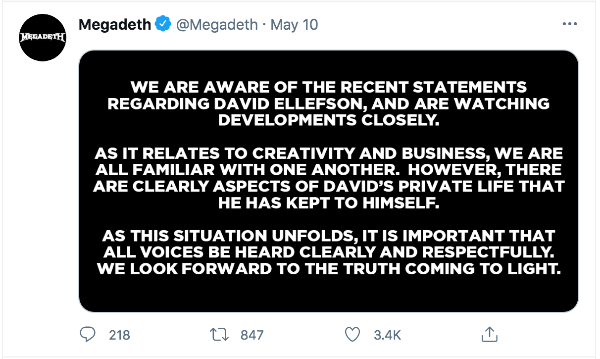