One of the world’s greatest drummers has died. RIP Charlie Watts, 80, drummer for the Rolling Stones since 1963.

We were profoundly sad to hear that Charlie Watts, The Rolling Stones‘ drummer for nearly 6 decades, died Tuesday in London. He was surrounded by family, including his wife Shirley of almost 57 years. He was 80.  No cause of death was given.

Watts’ publicist confirmed his death in a statement. “It is with immense sadness that we announce the death of our beloved Charlie Watts,” it read. “He passed away peacefully in a London hospital earlier [Tuesday] surrounded by his family.” The statement referred to Watts as “one of the greatest drummers of his generation” and closed by requesting that “the privacy of his family, band members, and close friends is respected at this difficult time.”

Watts’ death comes several weeks after it was announced that he would not be able to perform on the Rolling Stones’ No Filter tour of U.S. stadiums. “Charlie has had a procedure which was completely successful, but his doctors this week concluded that he now needs proper rest and recuperation,” a rep for the band said in a statement at the time. “With rehearsals starting in a couple of weeks, it’s very disappointing to say the least, but it’s also fair to say no one saw this coming.”

Charlie — along with Keith, Mick and Brian Jones — is a founding member of the world’s greatest rock ‘n’ roll band. They all met in 1962, while playing London’s blues clubs, and first came together as a band in 1963.

As Keith Richards said in 1979: “Everybody thinks Mick and Keith are the Rolling Stones. If Charlie wasn’t doing what he’s doing on drums, that wouldn’t be true at all. You’d find out that Charlie Watts is the Stones.”

“To have a drummer from the beginning who could play with the sensibility of Charlie Watts is one of the best hidden assets I’ve had, because I never had to think about the drummer and what he’s going to do,” bandmate Keith Richards said in the 2003 book, According to the Rolling Stones. “I just say, ‘Charlie, it goes like this,’ and we’ll kick it around a bit and it’s done. I can throw him ideas and I never have to worry about the beat. … It’s a blessing.”

Understandably, the tributes have been rolling in: 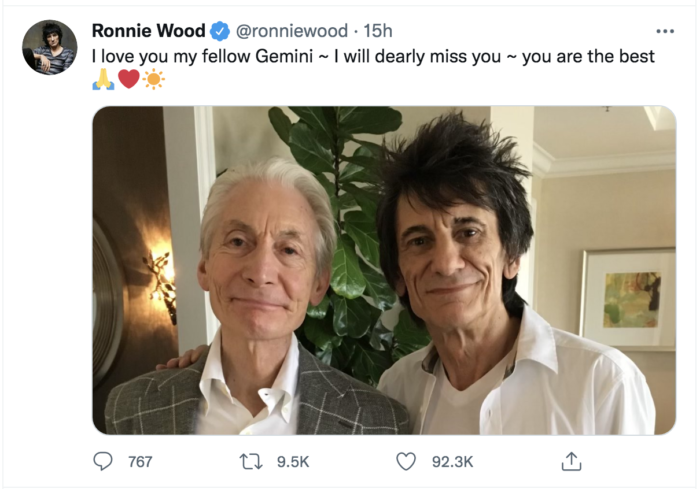 Paul McCartney recorded a short video remembering Watts as a “beautiful man” who he “always loved.” “Charlie was a rock and a fantastic drummer. Steady as a rock.” 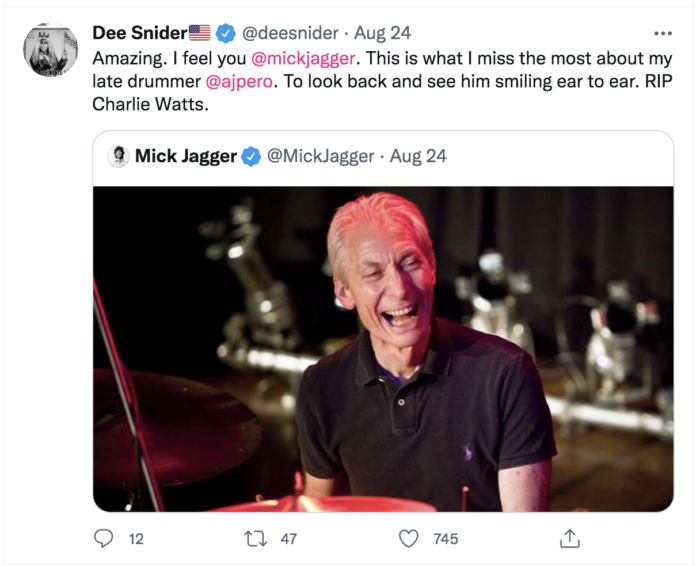