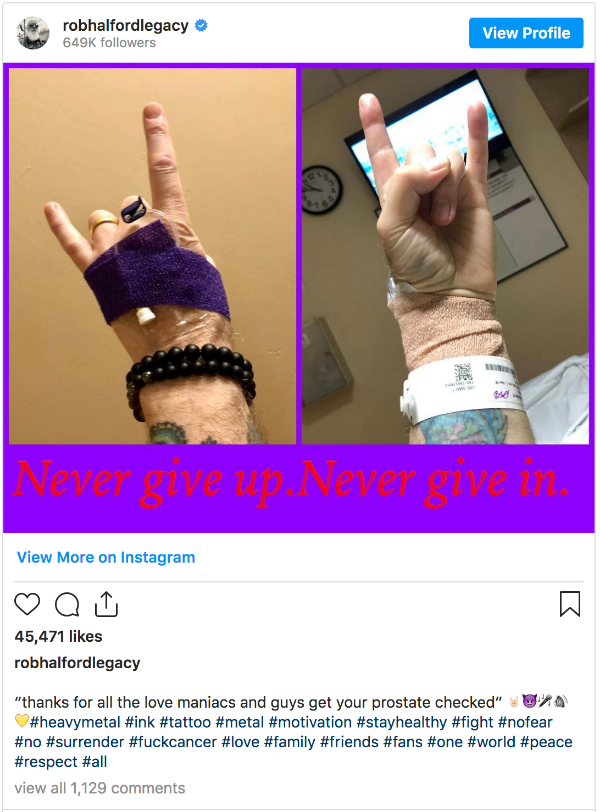 Judas Priest frontman Rob Halford revealed he’s been battling prostate cancer, but was given the all-clear in June

70-year-old Halford dropped the bomb during an interview with Heavy Consequence to promote Judas Priest’s 50 Heavy Metal Years of Music anniversary box set, which was released today. Fortunately, he says he’s in remission:

Halford has revealed that he battled prostate cancer during the pandemic. “I had my little cancer battle a year ago, which I got through and that’s in remission now, thank God,” he told Consequence. “That happened while we were all locked down, so things happen for a reason as far as time sequence of events. I have nothing but gratitude to be at this point in my life, still doing what I love the most.”

Halford’s memoir, Confess, has just been released in paperback, and includes a new chapter in which the vocalist further opens up about the ordeal. The Metal God says he began to show symptoms in 2017 before being diagnosed last year:

Rob previously mentioned his cancer battle in the new chapter added to the updated paperback edition of his 2020 memoir, “Confess”. According to Halford, he was diagnosed after experiencing symptoms for at least a couple of years.

“I felt a combination of shock, horror, and oddly, relief — at least now I know!…’Am I going to die?'” he wrote. ” It was all I could think of. I know blokes who’ve died of prostate cancer. ‘No, you’re not going to die, Rob,’ said Dr. Ali.”

In July 2020, Halford underwent a prostatectomy (surgical removal of the prostate). After the cancer reappeared earlier in 2021, he spent April and May undergoing radiation therapy and eventually got then all-clear in June, 2021.   Additionally, he had an appendectomy after they discovered a tumor on his appendix.

“It’s been a draining year, I can’t deny it, but I’m delighted to have come through it,” Halford wrote in the book, according to Consequence. “I feel like I’ve had the most thorough MOT that a Metal God can have.”

Judas Priest were recently forced to postpone the remainder of their 2021 U.S. tour when guitarist Richie Faulkner suffered an aortic aneurysm and dissection mid-show. He is now home and recovering following ten hours of emergency open heart surgery.

Judas Priest are scheduled to play support on Ozzy Osbourne’s tour of Europe and the U.K. next year, although what Faulkner’s condition will be like then remains unclear.