Vince Neil fell off stage last Friday during a show at Monsters On the Mountain in Pigeon Forge, Tennessee.

Fan-shot video footage of the incident from Vince’s solo gig showed the 60-year-old walking to the front of the stage of the LeConte Center in Tennessee, moving closer to the audience to get them all clapping along.

He then took a fast tumble down a four-foot drop because he reportedly ​“didn’t notice” a small gap between the stage and speaker.

Neil was hurt enough to go to the hospital for X-rays and a member of his solo band announced to the crowd that he might have suffered a broken rib.  TMZ reported “there was a small gap between the speaker and the stage that Vince didn’t see and he fell through the crevice onto the floor.”

After the fall, bassist Dana Strum tells the crowd “The truth is Vince fell and broke ribs when he fell. He can’t breathe and he’s gonna get dealt with medically. He was so excited to be here. He lives in Tennessee. But he was willing to stick it out and tough it out when the people back here were telling him ‘Don’t do it.’ Let’s have one good round of applause, please, for this guy.”

The show was completed by guitarist Jeff Blando taking over on lead vocals.

Two days later, an update was shared by Mötley Crüe that read that, ​“Vince is back home and resting after breaking a few ribs on Friday night. Our love and best wishes for a speedy recovery and ready to rock in ​’22!!”

Mötley Crüe is slated to begin their stadium tour with Def Leppard, Poison, and Joan Jett And The Blackhearts in June 2022.

Poor guy can’t catch a break this yea! No pun intended, and no disrespect. We all admire him for trying to whip himself into shape to keep rocking. Get well soon – Prayers to Vince for a speedy recovery  🙏. 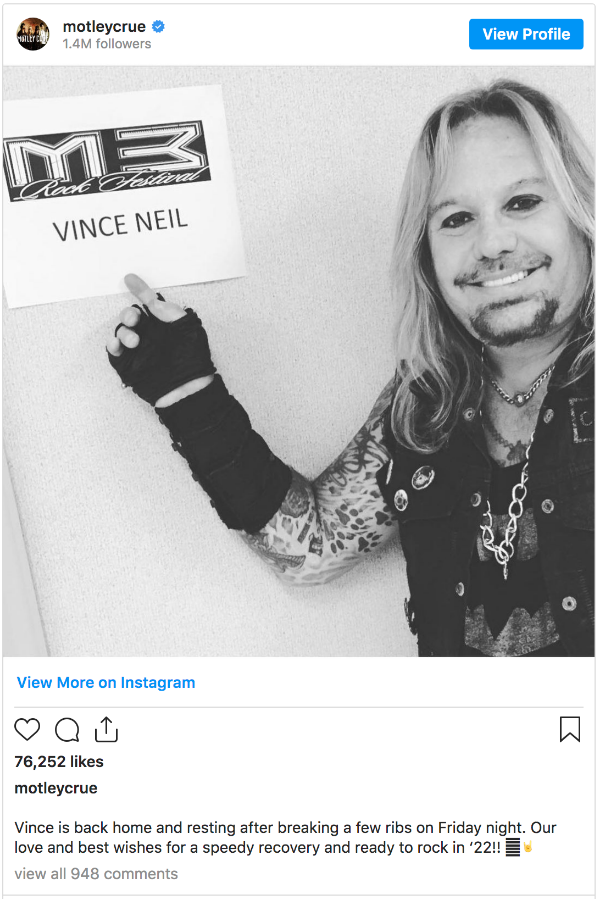